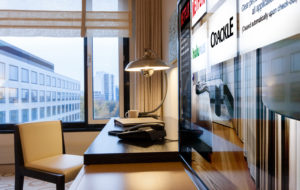 We always knew Netflix was popular but now we have some idea how popular it is when people have the option of Netflix or traditional pay TV.

Enseo is a company that enables hotel TVs to access a wide range of apps and features. These TVs allow hotel guests to watch Netflix, YouTube, Hulu, Crackle, and other services through their hotel TV. Enseo has released a report on what people were watching during the period of October 1, 2016, through December 30, 2016.

Read the Rest of the Article at Cord Cutters News