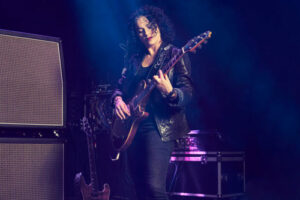 Next time you see Enseo’s CEO and founder Vanessa Ogle, you might want to ask for an autograph. Not only is the tech luminary redefining in-room entertainment in the hospitality industry, but she also has been known to shred a few licks on her custom-built electric guitar.

Partnering with a local nonprofit, Ogle and her employee-fronted band, GEM, have rocked a sold-out benefit show at each of the past four Hospitality Industry Technology Exposition & Conferences. Along with Ogle and her husband on guitar, Chief Cultural Officer Peyton Wimmer plays rhythm guitar. Meanwhile, Director of Engineering Craig Smith is on bass, and Director of Sales Jeffrey Smith handles backup guitar. Enseo’s Chief Commercial Officer Brand Bush is keyboardist. Finally, Director of Network Products Alex Ocampo brings it home on drums. Along with several guest cameos from other musically inclined Enseo employees, GEM is set to make its fifth straight appearance at HITEC in San Antonio later this year.

company growthmusicwomen in businesswomen in technology